I absolutely love this game! I highly recommend to anyone who might consider buying it. The battles are super fun, the tournaments are also fun. I love the concept of collecting the dinosaurs, and each one has its own special ability in the battles. The graphics are great and the game is awesome. But I do have some suggestions for you to make the game even better. When you evolve a dinosaur, yes it adds a star to it and it makes it better in battle... but if you could give another reason to evolve it than just battle and a star. A suggestion for that would upgrade it, change the look of the dinosaur or make its cage bigger. You could also add more to a dinosaurs information than just the level, ferocity, species, and amount of coins it makes in a certain amount of time, you could maybe add an option to give your dinosaur a name, you could also add some information about the dinosaur so you could have a clue about what it’s strengths might be in battle without giving away too much information. These are just some thoughts I have while playing the game, other than that I enjoy it very much.

From Vivendi Universal Games: In Jurassic Park: Operation Genesis, you build the hatcheries, feeding areas, and security equipment, then let the general public in to have some fun. As in other park sims, you'll need to balance entertainment and safety (watch out for that rampaging T-Rex!) to keep your customers happy. Unlike other park sims, Operation Genesis gives you a full set of action-based missions that add more vehicle-based gameplay and shoot-'em-up fun. The demo version of Operation Genesis includes a brief tutorial, two missions (sedating rampaging carnivores or taking snapshots of dinosaurs in action), three types of dinosaurs, open-ended simulation gameplay on "Site B," and the Dinopedia, a compendium of information about all the dinosaurs involved in the full game. 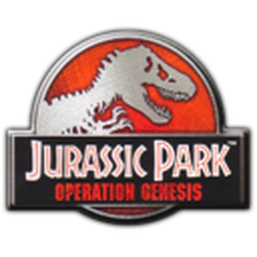