Age of Empires III is an historically-based real-time strategy game designed by Ensemble Studios, makers of Age of Mythology and Halo Wars.

After a lengthy installation, say a little prayer that your machine can handle this demo, because the system requirements aren't listed anywhere in the download package. The Age of Empires III demo provides hours of fabulous real-time fun, but lack of documentation and instruction haunts the experience.

The ReadMe.rtf file includes a useful list of shortcut keys, but there's no introduction or explanation of the gameplay, so you'll have to find your own way. In two single-player scenarios (building trading posts along a railroad track and defending a fort) and two skirmish maps (Texas and New England), you'll be collecting resources, raising structures, creating units, and bombarding your enemies.

Gameplay is deep, involved, and addictive, though the one major addition--the ability to send special shipments from home cities--seems extraneous. Noticeable absences in the hot-keys list are the ability to select all of one unit type and to create custom unit groups. Such shortcuts might exist, but without detailed help, we couldn't tell. Also, we were slightly disappointed with the range of view and the graphics overall. The rag-doll physics make for fun combat scenes, but the graphics themselves are actually less impressive than last year's Rise of Nations.

From Microsoft Game Studios: In this action-adventure tale of historical fiction, players take on the role of Morgan Black and his family, struggling against the hostile wilderness and a mysterious cult from Europe. In 24 scenarios, Morgan Black and his descendants help the Aztecs resist conquest by Spanish conquistadors, pit the French against the British, and help Simon Bolivar lead revolutions in South America.For multiplayer action, contend against opponents with persistent Home Cities that gain power and strategic options the more games you play, compete for a spot on dozens of ladders, help organize your clan, or chat after a game.This demo for Age of Empires III includes two missions from the single-player campaign. The demo also includes a single-player skirmish mode where you can play as the British or Spanish empires in the New England and Texas maps. The latest update of the demo includes a worthwhile tutorial and the ability to minimize the UI. 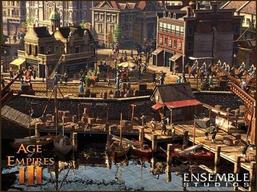 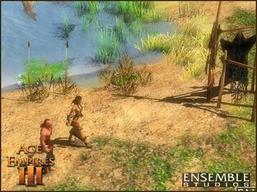 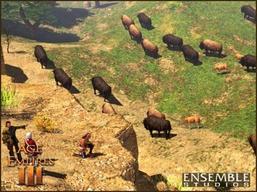 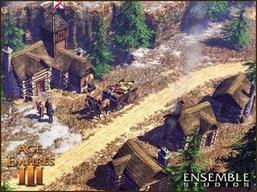