This is a wonderful app, I use it most of the time and I have no issues. However, I have a feeling that hackers are piggybacking off this vpn network from time to time. Occasionally my network will slow, up the most blatant breech of privacy I had was when my Mortal Kombat X data was stolen. I do not blame the company for this in any way, but it was too coincidental that after using and deleting this app, my data on that game was stolen. This is a great app, and I highly recommend using it, and unless you just so happen to be on when one of those piggybackers are breaching the network, your data is usually safe. Downloading this app is kind of a gamble, but the odds are usually in your favor. If I had to suggest something for this app and it's developers, I would suggest they update their firewall protection more often, to keep those hackers out.

This VPN is great, and has the opportunity to expand. I can honestly say I haven't seen any adds, and all of my data and traffic is secure. No one can see my IP address either. They kept their word. Other vpns tend to be too difficult. This one finds u one without you having to do it manually. And it's the closest ones. And for the people that said FreeVPN wasn't clear about you having to pay 2.99 a month after the intitial cost if you upgrade to pro and wanna stay ad less. It actually does say that before u upgrade. People are stupid. Some people. But they don't pay attention to what the app is telling them. And I haven't seen any adds. I'm up to a week of being Ad less just for watching a 10 sec video. And I honestly have not see one.

In full honesty, this VPN has done it's job. It accesses many different applications that would usually be blocked by others, it runs easily and without hassle, making it a quick process to turn off, and turn back on again. The ads aren't too disruptive, which is a big plus in my books. However, the amount of time the VPN remains on is not a guarantee. From my experience, even if I do watch advertisements to get ad free minutes (Which is a good way to gain income, while also making ads less of something to worry about) the VPN will still shut off at random times. This is especially annoying if you enjoy mobile games, such as Fortnite, Clash of Clans, etc. But other than that, if you're looking for a VPN to use, this one would be it.

From Jailbreak VPN: Free VPN By Jailbreak VPN is the Fastest Windows VPN Provider and Proxy in the World. Up to 500 Mbps Internet speed. Access media, video & messaging apps from around the world. Unblock social networks. Keep your mobile activities safe & private. Enjoy unlimited VPN bandwidth. Our free VPN service offers Wi-Fi security, online privacy, and access to blocked content & apps like Facebook, BBC, Skype and YouTube via proxy. Activate free VPN with 1 simple click. Why choose us? 1) Dedicated VPN Service 2) Quality and reliability 3) Completely free VPN service 4) Gigabit internet speed 5) World's best technical support staffs 6) Malaysia based corporation How to use? Step 1: After installing, just click on connect button Step 2: Wait until the Green "Connected" status is being shown. Now your real IP is hidden and your mobile is protected from online threats. It is that simple. 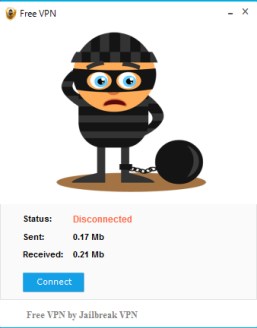