As a lifelong fan of the WWF/WWE, I love a large variety of the programming made available on the app. I agree with other reviews in that there should be more Original programming. Also, the rolling out of older programming from other federations/wrestling organizations is frustrating. They've definitely shown improvement but they're definitely taking their time. Heck, where's Wrestling Challenge and Superstars? My biggest frustration however is how many times I have to try to open the app on my iPad before it successfully loads. It'll give the impression it's going to load each time but then crashes shortly after. On average it takes 7-10 attempts to get the app/network to load.You should also have an option to remove things from your "Continue Watching" list. Often times I'll complete a program in its entirety yet it's still in my list. (Sometimes reflecting where I originally continued watching) it's really aggravating because you have to go through each program, love the slider bar close to the end, let a few minutes play. It then will prompt you with the next program they try to get you to watch. You have to press done QUICKLY otherwise it will then start THAT program and you have to repeat the process. Can you say RIDICULOUS AND IRRITATING? I knew you could.The WWE Network could learn a lot from their fans and what they look for in programming and more if they just took us, and not just our money, seriously.

Hi, I used to love this app, so I gave it an extra star. But now, the app would just go to the loading screen and will not finish. I hope that this will be fixed, but until then, only 2 stars. What I mean by, not loading, I mean it goes to the WWE logo, the loading wheel spins, and spins, and spins. The entire app doesn’t work! Okay, I found out it was my internet, but now, when I sign into my WWE Network account, it either says, “You are signed in as...” or “You are not authorized to see this media.” Please fix this, because for a long time, I’ve been a WWE fan, and I still have hope that this will fix, but if it doesn’t, I will be forced to cancel my subscription. Thank you,-AidenTGM101

From THQ: Battle top superstars modeled in amazing detail. The application's features include TV-style presentation with in-game cutaways and "Double Feature" replay, along with dynamic lighting effects and fully scaled arenas. Thousands of move animations include tons of superstar signature moves. For the first time ever, you can assault opponents on their way to the ring. A variety of match types include "King of the Ring" tournaments with up to six superstars in the ring. WWE Raw features authentic superstar entrances complete with full "TiTanTron" videos. Enhanced multiplay capabilities include four-player tag team, handicap, and triple-threat match variations. The Raw demo lets you play a 1v1 match pitting The Rock against Kane. 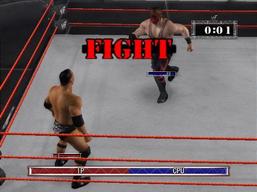