Whether you're an old pro at screen recordings or this is your first time out, Bandicam makes it easy to set up and start recording anything on your screen. Less experienced users will like that the default settings mean you can basically start recording in only a couple clicks.

Capture options: You can choose to share your whole screen or only a specific portion, and it's easy to resize the window so that it shows only what you want it to. You can record in AVI or MP4 format, and there are presets that let you quickly adjust to a specific width or adjust for a YouTube-friendly recording. It will include any sounds that are playing while you record, too, so you can play your own soundtrack or capture the full sound effects if you're recording a game you're playing. There's also an option to capture straight screenshots, with four output options, including BMP, PNG, and JPG.

Easy to use: While there are advanced options and settings, if you don't want to mess around with these, Bandicam is preset to record in AVI format at 30 frames per second. It also detects your primary sound device and webcam (if you have one). When we went this route, the recording was of good quality, but it was also good when we made some minor tweaks of our own and changed to MP4 instead of AVI.

Some features not available: We were happy to see a button to edit the recordings we'd made, but it turns out that that just leads to an option to purchase the publisher's editing tool, Bandicut. Some tools offer these as part of the package. In addition, the option to play the recordings just opened our default media player.

If you need to record your screen with a minimum of fuss, Bandicam makes the process easy and creates good quality recordings or screenshots. It's not free, but the trial version will let you know if the price is right for your needs.

From Bandicam: Record Everything (Game + PC + Webcam screen) and save it as AVI, MP4 files. Bandicam is the best Game, Video, Webcam and Screen recording software. You can record WOW, Minecraft, iTunes, YouTube, PowerPoint, Webcam, Skype, Video chatting, Streaming video and the desktop screen without lagging. Bandicam compresses the video while recording and uses much lower CPU/GPU/RAM usage, and it fully supports the hardware accelerated h.264 encoder of Nvidia NVENC/CUDA, Intel Quick Sync video and AMD APP which allow video to be recorded in high speed, with a high compression ratio and excellent quality. As a result, it has less lag and you can save your HDD and CPU. Bandicam displays FPS number in the corner of the screen while it is active in the 'Game Recording Mode'. It also can record video at resolutions of up to 3840x2160 in high quality (2160P UHD video can be made) and your webcam stream will be simultaneously recorded and merged with the game / screen recording (Picture-in-Picture, Video-in-Video). In addition, Bandicam supports a real-time drawing function which allows users to draw lines, boxes, or highlights while recording the computer screen. You can upload the recorded file to YouTube without converting because the recorded file size is much smaller than other software (1/5 ~ 1/20 video size). Bandicam supports AVI 2.0, the maximum file size is unlimited as long as the local Hard Disk has free space available (Over 24 hours recording can be possible). Furthermore, Bandicam, when in screen recording mode, supports the real-time highlighting of the mouse cursor and mouse click effects, a feature which competing software lacks. When these mouse effects are used in conjunction with simple microphone recording, Bandicam is the ideal screen recorder for making tutorials. 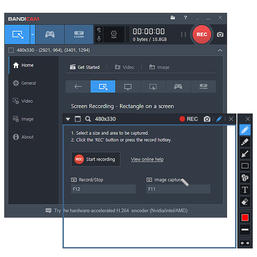