I had been using the trial version of this app for a long time and it was great. I only purchased the premium version to support the developers. Fantastic job fellows. I love this dictionary. What I would like to see in future updates is integration with Siri. That's what's missing from this app. Different ways of looking up words, for instance searching definitions, rhyming words, etc. would also be a welcome addition.Update: voice recognition has become God aweful since you integrated it with Siri a few iterations ago. It was dead-on before. Now it fails 9 out of 10 times. It's practically unusable. Very unfortunate. I'm keeping my 5 stars but please fix this.2nd update: voice recognition is a lot better now, but still struggles with single syllable words. It needs work and could be much better. I rely on voice search for words I have no idea how they're spelled. So typing can't always replace voice search.Also, please add fuzzy search. It's a basic yet an absolutely essential feature that should've been baked into the app from the first release.

This is the only online dictionary I use or recommend. It has so many (free) ways to help people expand their vocabulary, and these extras work for high school & college, to writing for personal reasons. That’s the extra that I use, and love, the most; the common synonyms & antonyms, but also M-W includes a lot much more. The one that’s best for me & my writing is the origin of the words, including the approximate historical date (in centuries) in which the word was “created” and who most likely created it. At times I find that the original meaning (as used when it was created) is very different to the present day meanings! I went ahead & bought the pro-version, as I use it so often in my writing. I’ve found that M-W the dictionary to be the most user friendly, & helpful. Apologies, but I don’t remember how much is was. I only remember that it wasn’t very much. Just try it, (even the free version still has almost all the things I’ve mentioned.) use it for awhile & compare it to the other online dictionaries. I’m confident that you’ll pick, & stay with, the Merriam-Webster dictionary. ??

I switched from the Oxford dictionary app I previously had for what might appear to be political reasons yet is actually a non-partisan one: defense of word definitions. When President Trump began tweeting out non-sensical statements that twisted or hollowed out the very meaning of certain words he was trying to use in an Orwellian manner, M-W would tweet out a response that focused on the actual definition of the word in defense of meaningful language. It may have appeared partisan to some, but to me it was a simple & timely reminder that words are not empty vessels. They are not window dressing. They are the window itself and attempts to use them to communicate in a way that is deliberately counter to their actual meaning effectively gaslights an entire language & the very culture that relies on it. I am happy with the app, & even happier supporting a company that recognizes that defending the meaning of words is to defend its core reason for being. Thank you M-W. 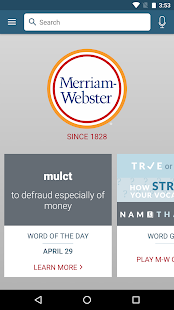 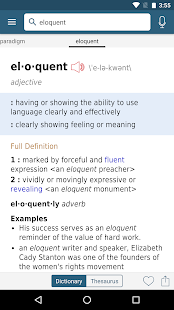 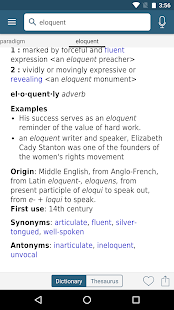 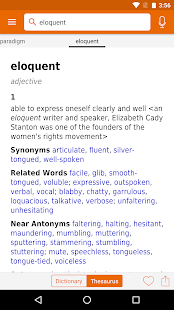