NFL Mobile offers the same mix of media content, stats, and game center that other sports apps feature, but has a rather slow navigation and requires an upgrade for live video content.

Helps you track your favorite team: NFL Mobile lets you choose your favorite team and then ensures that you receive push notifications with the latest news and scores. You also get a whole page dedicated to your team, which you can access by tapping on its name on the main screen.

Handy when you're on the go: Keeping up with matches, scores, drafts, injuries, and intrigues in the bustling National Football League can be tough, but this app manages to bring you all that info in an accessible format.

Engaging fantasy game: The built-in fantasy game is great fun in the breaks between games and comes with useful research tools such as Trends and Projections. Putting it down won't be easy.

App demands your location: If you don't set your location during the quick initial setup, you'll be asked for it whenever you try to play a video. What's worse is that when traveling to a foreign country, you may not be able to watch some videos.

Slow at times: The app features lots of images and videos and has a rather long menu with plenty of submenus, which make it rather slow, especially on a smartphone. What's worse is that it also drains the battery, eating up as much as seven percent of it in 20 minutes.

If you're a football fan, you can't miss NFL Mobile. It boasts plenty of content and a pleasing design, and although the navigation and accessibility could be improved, it's still great fun. What's more, it doesn't use aggressive in-app marketing ploys to make you buy live content or gear as other sports apps do.

From NFL Enterprises: The NFL App is the best, pure football app for any fan. From live game streams (Verizon smartphone customers only), to trending videos on NFL Now to replays of every game with NFL Game Pass (subscription), the NFL App is packed with more video than ever. Whether it's game day or non-game day, from preseason through the playoffs, the NFL App keeps fans on top of the game with breaking NFL news, highlights, stats & more wherever they are, whenever they want it. Phone features (only available with Verizon) : All Verizon customers get access to exclusive live content on their phone. , including: 2016 regular season games2016 NFL Playoff games2017 Pro BowlSuper Bowl LINFL Network 24/7/365Phone and Tablet features: GAMES: Follow along with up-to-the-minute scoring, in-game highlights, big play markers and drive charts; fans can also access NFL Game Pass (subscription content). STORIES: Read articles and watch videos highlighting the latest stories and breaking news from around the NFL and from all 32 teams. NFL NOW: Brings fans the latest stories and trending topics across the NFL and gives direct access to all 32 teams. STATS: Track league and team leaders in all major stats categories. MORE: Watch video on demand, see the NFL Network schedule, browse the NFL Shop, and more. Tablet-only features: NFL Network 24/7/365 and NFL RedZone are available for eligible subscribers of AT&T U-verse, Charter, Cox, DirecTV, Optimum, Verizon FiOS, DISH, and many more providers. All fans can access NFL Game Pass subscription content within NFL Mobile. NFL Game Pass is a subscription product with features that vary based on location. 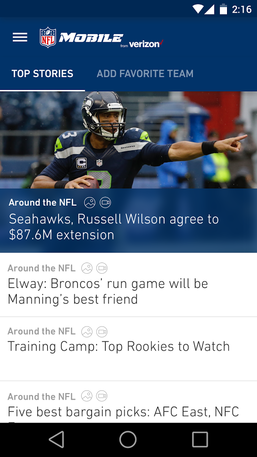 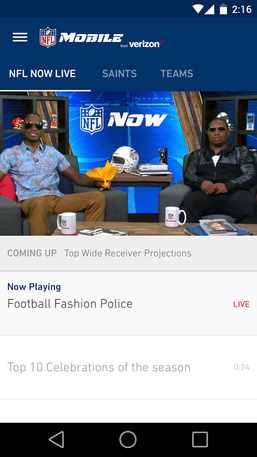 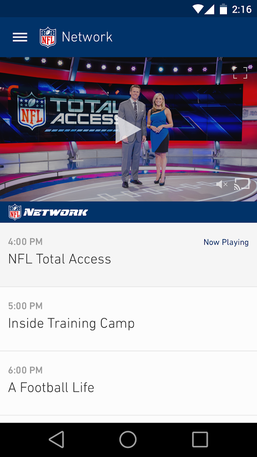 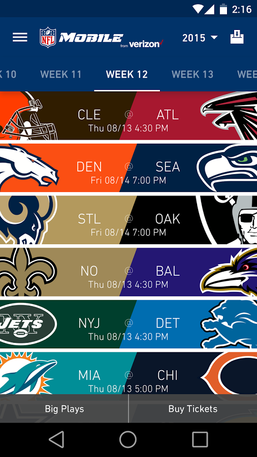