Get out, meet your neighbors, and capture the local pocket monsters in Pokemon Go for Android.

Not an armchair game: To play Pokemon Go, get outside. Find and capture Pokemon in parks, on street corners, near monuments, in front of churches, on piers, with neighbors, but rarely in front of your home.

Growing community support: Following the game's launch, Niantic seems overwhelmed by the success of Pokemon Go and was slow to react to the needs of the large, vocal, and, at times, frustrated player community. After some initial stumbles, Niantic has done a better job of creating public events, from festivals, monthly community gatherings, and holiday parties, to raids and periodic releases of legendary monsters and new pokemon from different regions.

Battle for gyms: Maps are dotted with gyms, where you can battle for control over a gym. You can fight opposing teams for control or assign up to six of your best Pokemon to defend one.

Battle with other trainers: Raid Battles occur when a Boss Pokémon takes over a Gym. Your goal is to defeat this Pokemon, and to do this, you'll need other trainers. Thankfully, the game will notify you of upcoming Raid Battles in your area.

Gather supplies: To stock up on items -- including potions, medicine, balls, fruit, eggs, and incubators -- visit PokeStops and Gyms and spin the photo disc. Each visit generates random items you collect by tapping.

Gyms skew to higher level players: Gyms, especially in populous locations, tend to be held by high-level trainers with their high-level monsters. While Niantic has adjusted gym mechanics to give more players a chance to knock out opposing Pokemon and occupy gyms with their own monsters, battles over gyms still tilt toward Pokemon with higher hit points and combat power.

Microtransactions: While the game is free to play, unless you are super diligent about collecting and then managing your supplies, you can easily run out of Poke Balls or space in your bag to carry items. Through a shop, you can purchase additional balls, incubators, lures, incense, and bag upgrades. Items start around a buck and top out at $10.

Get out, take a walk, and capture pocket monsters in Pokemon Go for Android. The free-to-play game is rewarding no matter your level, but to achieve high levels requires an investment of time and possibly money.

From Niantic: Venusaur, Charizard, Blastoise, Pikachu, and many other Pokemon have been discovered on planet Earth! Now is your chance to discover and capture the Pokemon all around you, so get your shoes on, step outside, and explore the world. You'll join one of three teams and battle for the prestige and ownership of Gyms with your Pokemon at your side. Pokeon are out there, and you need to find them. As you walk around a neighborhood, your smartphone will vibrate when there's a Pokemon nearby. Take aim and throw a Poke Ball You'll have to stay alert, or it might get away! Search far and wide for Pokemon and items. Certain Pokemon appears near their native environment, look for Water-type Pokemon by lakes and oceans. Visit PokeStops, found at interesting places like museums, art installations, historical markers, and monuments, to stock up on Poke Balls and helpful items. Catching, hatching, evolving, and more. As you level up, you'll be able to catch more-powerful Pokemon to complete your Pokedex. You can add to your collection by hatching Pokemon Eggs based on the distances you walk. Help your Pokemon evolve by catching many of the same kind. Take on Gym battles and defend your Gym. As your Charmander evolves to Charmeleon and then Charizard, you can battle together to defeat a Gym and assign your Pokemon to defend it against all comers. 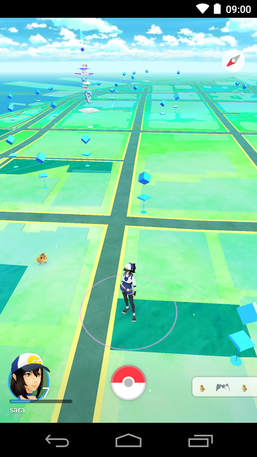 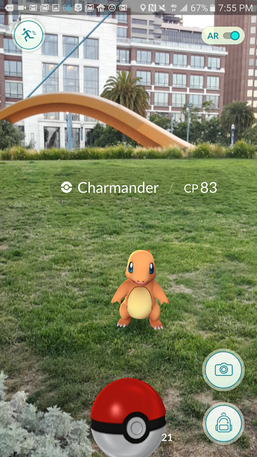 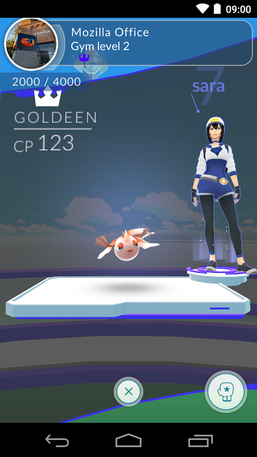