Super Mario Run brings Nintendo's classic Super Mario Bros. video game to Android. In this endless runner and jumper, there are six worlds (and 24 levels) to traverse, but only World 1 (levels 1-3) is free. All six worlds will run you a hefty $9.99.

Engrossing story: Super Mario Run has a backstory that's easy to lose yourself in and hard to leave. Whether or not you're familiar with the game's history, you'll understand your goal. Bowser, your archenemy and leader of a race of evil turtles, has kidnapped your beloved Princess Peach and wrecked her castle. You must run and jump your way across six worlds to rescue her. Just make sure you don't trip or fall prey to Piranha Plants and flying Koopas (turtles).

Three unique modes: You can choose from three modes: Tour has 24 90-second courses to traverse; Rally lets you compete against friends and randoms in 60-second challenges; and Build tasks you with redecorating a destroyed Mushroom Kingdom with flowers, trees, and bridges, which you purchase with coins and unlock by collecting Toad followers. With so many options, you won't soon grow bored with Super Mario Run.

Easy gameplay: Super Mario Run can be played with easy one-handed swiping, tapping, and holding, which makes it a great game to play on the go. During testing, we found the game highly responsive to our touch.

Unlimited retries: No matter how many times you mess up, you can get back into the game.

Informative introduction: Super Mario Run provides an informative intro, which explains that Mario's running and vaulting over obstacles and small enemies is automatic. Tapping or pressing on the screen enables you to jump onto higher platforms and pull off some cool moves, such as kick-jumping and spin-jumping. Should you make a mistake, you'll pop into a bubble and get to try again. Once you stop spinning, just tap the screen to break the bubble open, and you'll be back in the game.

Friendly competition: Add friends in Super Mario Run, just to leave them in your dust.

Pay to play: You only get to play one-sixth of the game in the free version. To purchase all six worlds, you'll need to cough up $9.99, which is a lot for a mobile game. However, you'll also get 3,000 coins; one Question Block, containing a special prize or superpower; and 20 Rally Tickets, which you can use to compete in a Toad Rally, a special coin-gathering moves challenge against players from all over the world.

Super Mario Run packs all the excitement of Nintendo's old-school Super Mario Bros. video game into a lightweight app that you can play with one hand on the go.

From Nintendo: A new kind of Mario game that you can play with one hand. In this game, Mario constantly moves forward through the courses while you use a variety of jumps to navigate. Mario will behave differently depending on the timing of your taps, so it's up to you to show off particularly smooth moves, gather coins, and reach the goal. Internet connectivity required to play. Data charges may apply. World TourRun and jump with style to rescue Princess Peach from Bowser's clutches. Travel through plains, caverns, Ghost Houses, airships, castles, and more. Clear 6 worlds filled with 24 brand-new courses designed for one-handed play. Access to all 6 Worlds subject to purchase. Toad RallyShow off Mario's stylish moves, compete against your friends and challenge people from all over the world. A challenge mode where the competition differs each time you play. Compete against the stylish moves of other players for the highest score as you gather coins and get cheered on by a crowd of Toads. If you're impressive enough, the Toads may even come live in your kingdom. You can also perform stylish moves to fill up your gauge and launch into Coin Rush. In order to play Toad Rally, you will need Rally Tickets that you can acquire in a variety of ways, such as clearing worlds or through bonus games in your kingdom. Kingdom BuilderGather coins and Toads to build your very own kingdom. Create your unique kingdom with buildings and decorations that you acquire with the help of Toads gathered in Toad Rally. There are over 100 kinds of items in the Kingdom Builder feature. You will be able to download and enjoy a portion of Super Mario Run for free and can also enjoy all of the game content available after paying a set purchase price. We permit our third-party partners to collect data from this app for analytical purposes. 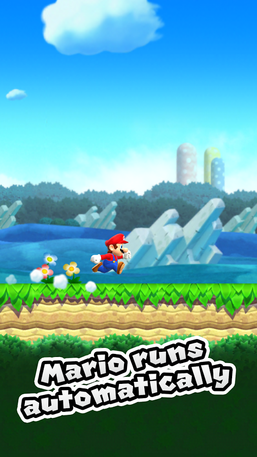 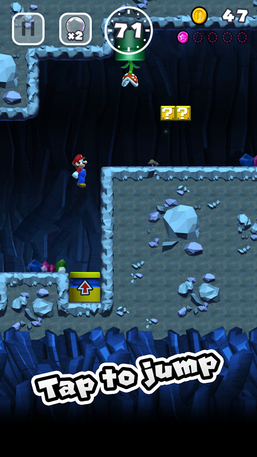 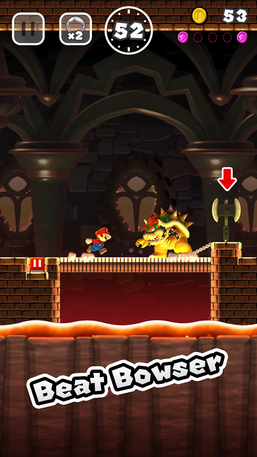 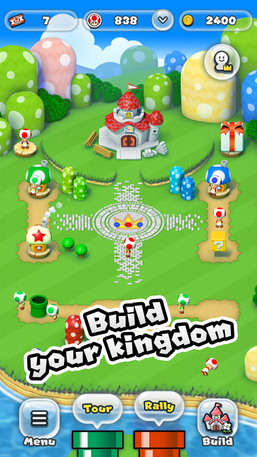