Call of Duty is as ubiquitous in modern gaming as any franchise, appearing and breaking sales records like clockwork every fall. For those who enjoy the cinematic styling of the franchise and the jaw-dropping graphics and multiplayer action, it is an event marked by days off work and countless hours with a controller in hand. So, it is no surprise to find a number of Call of Duty games in the App Store, nor the Call of Duty Zombies rendition (popular on the consoles as an add-on). And while the developers do a good job of moving many of the features that make this franchise so popular on consoles to a tablet or phone, it is not quite the same.

The game has a limited number of options, which is a good thing in that it's on a mobile operating system and the scope of such a game will be limited to some degree. As a game, it looks fantastic and plays very smoothly on newer Apple devices running iOS 6.0 or higher. There is no lag or slowdown, and the load times are exceptional. Even the co-op modes played wirelessly are very good, though the speed of your partners' devices can have an impact. The game itself consists of your character facing off against waves of undead soldiers that move more slowly and launch fewer attacks than their live counterparts in the console games.

The gameplay is decent, but as is the case with most tablet games adopted from a joystick interface, the controls hold it back. Controlling with your thumbs works well enough, but never feels as satisfying as a physical controller. Our thumbs slipped repeatedly during testing, the aim button is above the right stick, and the look feature requires constant pressure from your right thumb (not moving). It's frustrating in a number of ways. But, the controls aside, the game is well made. It looks good, runs smoothly, and consists of the weapons, gameplay, and features you've come to know and love in a Call of Duty game. For hard-core CoD fans, this is a must-buy. For anyone looking for a fun diversion, it may not be exactly what you are looking for.

From Vivendi Games: Four Massive Zombie Maps. One Great New Price. Now includes the ALL-NEW fan favorite, Der Riese, the largest, most feature-rich Zombie map to date. This is the ultimate Co-op experience for the iPhone/iPod Touch! Der Riese (Zombie Factory) features: The all-new Pack A Punch Machine allows you to upgrade ANY of your weapons: Increased Firepower, More Ammo, and a new Metal Finish. New Teleporters allow you and your team to zip around this enormous map and evade the oncoming Zombie Horde. The Bowie Knife allows to you take down higher level zombies in one quick blow. Favorites such as the Hell Hounds, the Wunderwaffe lightning gun, and the Perks-a-Cola Machines return. The online 4-player co-op action you've come to expect returns with even more intensity. Shi No Numa (Zombie Swamp) features: Shi No Numa is a hauntingly beautiful environment filled with terrifying zombies, weapons, and zombie traps. New weapons featuring the Wunderwaffe DG-2. Fry hordes of zombies with a single blast from this shockingly powerful new weapon. Survive the Hellhounds! Ferocious and fast, the Hellhounds will test your reflexes and your team's ability to work together. New playable characters! Play as Tank Dempsey (US), Takeo Masaki (Japan), Nikolai Belinski (USSR), and the infamous Dr. Richtofen (Germany). New Zombie traps including the Flogger for massive Zombie destruction and the Zipline for quick getaways. Call of Duty: Zombies also includes: Verrckt (Zombie Asylum): Dare to enter the insane asylum and fend off the Zombie onslaught alone or with friends. Use electric traps to keep the zombies at bay. Nacht der Untoten: The original zombie map returns in all its glory. Fight to survive in the abandoned bunker that started the zombie phenomenon. About Call of Duty: Zombies: Call of Duty: Zombies brings the classic Call of Duty: World at War zombie-slaying game mode to the iPhone and iPod Touch. Featuring ALL 4 Zombie maps, youll need to bring along your friends to help push back the endless waves of attacking zombies! Highlights include: - Call of Duty: Zombies for the iPhone supports up to four players via Wi-Fi/Internet and two players via Bluetooth. Play with your friends in the same room, on the other side of town, and even across the globe. With the option of either private or open matchmaking, where theres a Wi-Fi connection, theres a friend to go Zombie-hunting with.* - This is the Zombie experience from Call of Duty: World at War. All 4 Zombie maps have been fully realized on the iPhone in a silky smooth 3D environment, along with the return of your favorite guns and killer power ups. - Three different control schemes are available to suit your style. Take advantage of the iPhones unique tilt capabilities or, for Zombie vets, use the virtual analog sticks to fend off the undead. - Call of Duty: Zombies features a massive list of unique Achievements. - Leaderboard support awards the best of the best, accessed directly through your iPhone or iPod Touch. Become the top zombie slayer and prove your standings to the world! So snap to attention, pick up Call of Duty: Zombies, and start fending off the zombie horde! *Wi-Fi support only at this time, play unavailable on cellular networks. Note: Call of Duty: Zombies is best played on a 2nd generation iPod Touch or higher with the latest firmware installed. 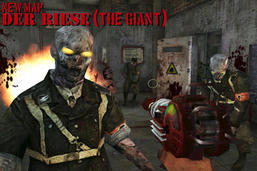