While Blood & Glory: Legend resembles Infinity Blade in some respects, its well-designed user interface and great graphics and storyline enhance the overall user experience. Given the fact that it is free, anyone who liked the app's predecessor, Blood & Glory, will surely enjoy the enhanced game. Still, we found that the game doesn't quite differ enough from the previous version.

We like games that have a story, and the developers of Legend have given users a reason to kill all those monster competitors besides staying alive. The game has a central figure, Crimson, who has to pass all tournaments successfully in all locations in order to reach the head man and claim victory. Anyone who has played the game's predecessor will instantly know what's involved, but even novices should pick it up quickly. The combat is about a series of swipes and taps; you need to successfully defend yourself and then attack when the time is right.

We liked the fact that the game provides onscreen help and gives detailed explanations of how the controls work at start. Also, the game freezes each time a new type of action is required during the trial combats, which should help novice players.

The game's great, detailed graphics make it highly enjoyable, and we were pleasantly surprised that there was no continuous push for in-app purchases. Still, players who want to reach the end will need to invest some real money.

Despite the great enhancement in graphics, diversified enemies, daily challenges that bring extra bonus rubies, a great story, Legend appears to be very similar to its predecessor. Also, as you go through the tournaments, the challenges become harder and harder, which requires better gear only available as in-app purchases.

From Glu: Optimized for the iPhone 5!Welcome to Blood & Glory Legend the highly anticipated sequel to the AAA blockbuster smash-hit Blood & Glory! Return to the arena and bask in the blood-hungry cheers of the crowd as you fight to become a LEGEND!Blood & Glory: Legend still manages to be one of the premier fighting games on smartphones and tablets, with a plot thrown in for good measure. Game TrailersFans of the first game should not be surprised to learn that this one looks amazing. GamezeeboVisually, Blood & Glory: Legend offers distinct improvements over its forerunner, with detailed environments, impressive combatants, and neat effects such as the blood patches that appear on the fighters as they receive damage. PocketGamerMuch-needed personality normally reserved for premium titles. MoDojoThe top-rated gladiator combat game continues with Blood and Glory: Legend! Equip lethal weapons and epic armor in your quest to achieve blood-soaked victory over the Emperor himself!MOTION COMIC STORYLINEJourney through the Empire, leaving blood-thirsty bosses in your wake as the all new animated comic story unfolds!STUNNING & AWARD-WINNING AAA GRAPHICSThe bleeding-edge graphics are optimized for the Retina Display of the iPhone 4, 4S, iPod (4th gen), iPad 2, New iPad and the iPhone 5. Note that the iPhone 3GS, 3rd generation iPod and lower devices are not supported. NEW MOVES & STRATEGYPerfect your skills and unleash stunning Special Attacks, Super Combos and the all new Glorious Strike! Enemies can now perform unblockable and undodgeable attacks so choose your defenses wisely!DAILY BONUS!Come back every day to earn free money and equipment! Complete battles ever day to earn even larger Bonus rewards!NEW ARENAS AND ENEMIESBattle new towering Giants and seductive Claw Vixens to the death in the new Snake Den, Viking Ship, and Neptune Temple!Blood & Glory: Legend is free to play, but you can choose to pay real money for some extra items, which will charge your iTunes account. You can disable in-app purchasing by adjusting your device settings. 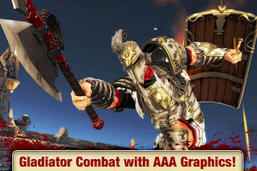 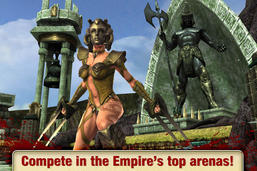 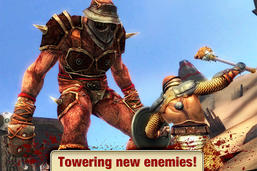 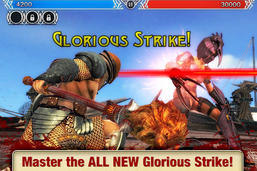