Great fun being able to play with family and friends now that we live so far apart but I would like to see some different versions of the game. The version I really enjoy is more of an offensive game. It’s fast and fun: To see who plays first just draw one bone...highest bone goes first. Mix them up again then draw seven bones each. Play as usual but if you play a double and/or score you play again. (If you can’t play again after a double or a score it’s off to the bone pile!)Try it out. I have not seen this version in any book but my family has played it for many years. It was started at a duck club in the 1950’s.Ps. Mine has never crashed...no issue. I play on an iphone 6...?

From Novel Games: Ever wondered why dominoes is one of the most famous tile-based games in the world? Come and experience its unlimited fun now! Your goal in Multiplayer Dominoes is to place all tiles in your hand onto the table before your opponent does so. The game is played with a set of 28 tiles. Each of the tiles has two sides, each of the sides is marked with 0 to 6 pips, for example 0-0 (a completely blank tile), 1-0, 1-1, 2-0, and so on. A tile which has the same number on both sides is called a "double." All combinations of numbers on the tiles are unique so that no two tiles are the same. When the game begins, each player will be dealt 7 tiles. The player who holds the highest double, or the highest rank of tiles if neither player is holding a double, will start the game. The two players will take turns to place a tile onto the table. During your turn, you can choose a tile in your hand which has a matching number of pips on one side with that of a tile on either end of the domino chain, then click and drag the tile to that end. For example if the tile on one end of the domino chain is a 5-4, you can choose the 4-3 in your hand and connect it with the 5-4. Note that when a tile is placed, it must be in a vertical or horizontal position that the matching sides of the two tiles are adjacent. A double must be placed perpendicularly to the previous tile, while the next tile played to a double must also be perpendicular to the double. Note that you can no longer connect a tile to an end of the domino chain when it is blocked by other tiles or when it reaches the edge of the table. If you have run out of moves, you can draw a tile from the stock pile, but you cannot do so if the stock decreases to 2 or below, and in this case, you will need to pass the turn to your opponent. The round continues until a player empties his hand and wins the round, then the total number of pips on the other player's remaining tiles will be added to the winning player's score. 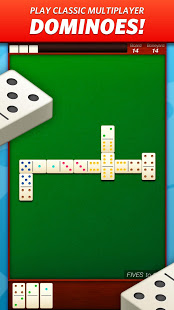 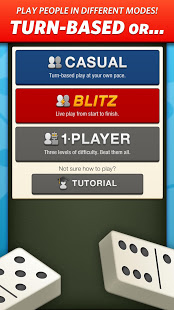 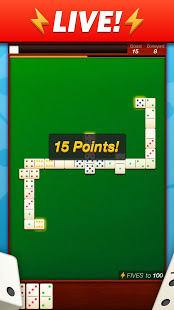 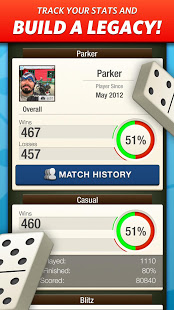