This is the best photo editor app. Ever. This is better than PicCollage, Over, and other apps like this. PicCollage is great, it’s somewhat of a social media, you can use videos and photos from the web instead of photo roll, but the choices are very limited. There’s only 15 fonts, I believe. Over, sure, it’s good, but you mainly have to pay to really use it to even half of its potential. Pronto is beautiful. Most of the fonts that I like, especially ones from Google apps, are on there. I don’t have to add my own. It’s somewhat confusing at the beginning, but only because it doesn’t provide a tutorial. The basics of using it is pretty much everything on there. Just search up how to use it and stuff. You can use the app to make quotes, business cards, logos, slogans, etc. If I were you, and wanted to take a photo from, let’s say, Safari for a pretty background, take a screenshot and click edit, click the weird right angles, and crop to your content. This is because Phonto only uses photos from your photo roll, and because the cropped is challenging to use for me, at least. I wish I could rate it with google stars! Get this!

Hello, this app is great. I also have suggestions for new features. My first most feature is secondary stroke, basically it strokes the first stroke and put this free because I paid for 3D feature, and I don't want to pay again. My second feature is that you can stroke the shadow feature. I saw many of thumbnails using this. My third feature is you can change the color of the picture, for example; color is red, you want to make it blue, then you have hold press the color to access the color changer, then use the hue bar to make it go to different colors by moving it left, or right. You can make this one paid and put this one in the filter. My fourth feature, and it's my favorite, is that everyone can share their creations and can advertise their own fonts, it can be found in the home screen of the app. You can also add free, or paid stickers. That's all I have.

Not a regular reviewer, but i had to find the review button for this app to review it. I'm an apparel Maker (So African Clothing) and needs to do design mock-ups for graphic artists. This app is so awesome I don't know if I could live without it. Sometimes i think it's unreal. I started off using it for memes, but then transitioned to designing tshirts and stuff and my whole world has changed. Oh my gawd. If you're reading this review to help you decide whether to get this app or not, don't even read the next word. Stop reading now and download this app ASAP. One thing i wish they had is a duplication option. Sometimes i type stuff or add an image from their library and i want to use it multiple times, but i have to keep going back and forth 5 times etc. i know i know, I'm lazy. America has made me a lazy African. Anyhow this app is just filled with Awesome juice. I go by Harry B and I'm out.

From youthhr: Phonto is a simple app that allows you to add text to pictures. More than 400 fonts are available. You can install other fonts. Text size is changeable. Text color is changeable. Text gradient is changeable. Text's stroke color is changeable. Text's shadow color is changeable. Text's background color is changeable. Text is rotatable. Text kerning is changeable. Line spacing is changeable. Curved text. Perspective text. Parts of text are erasable. Image theme is changeable. Items (Balloon, Rectangle, Star, Heart) are available. Background image is changeable. You can use not only pictures, but also plain images to write text. You can share photos on Facebook, Twitter, and Instagram. URL scheme: phonto://. Try Vont app, if you want to add text to videos. Vont is a free app that is available on the App Store. LANGUAGE. Phonto supports only English (US), Chinese and Japanese, so when the priority of Chinese (or Japanese) in your setting was higher than English, Phonto would be launched as Chinese (or Japanese) mode. To solve this problem. 1. Open the Settings app. 2. Choose 'English' in 'General' > 'Language & Region' > 'iPhone Language'. 3. Turn back your 'iPhone Language' to your favorite language. HOW TO INSTALL FONTS. Using iTunes, you can copy font files between your computer and Phonto on your iOS device. 1. Select your iOS device from the Devices section of iTunes. 2. Click the Apps tab and scroll down to the bottom of the page. 3. Select "Phonto" in the "File Sharing" section. 4. Drag and drop. ttf or. otf font files into "Documents". 5. Restart Phonto. More detail about how to install fonts. http://phon. to/install_fonts. Instagram: @phontograph. Twitter: @phontograph. Tumblr: http://phontogra. ph. http://phon. to. We obtained new URL which links to Phonto on the App Store. We appreciate if you introduce Phonto to your friends. 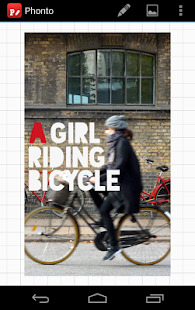 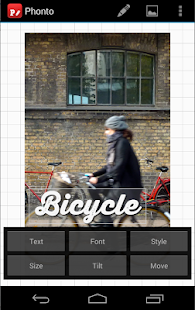 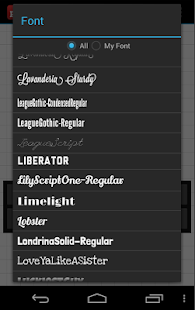 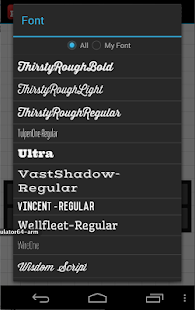