I loved this app up until the updates made about two months ago. I use this app exclusively for business and now it’s becoming a hassle to use. The app is constantly crashing, especially when trying to write text messages. I just tried to write the same message three times in the app and it crashed every time, so I finally gave up. I often have to write the text in another app and then copy and paste it into Google Voice for sending purposes, which I will have to do with this latest message as well. I’ve also had messages and voicemails that did not end up coming through, which cannot happen in my line of business. I like the fact that pictures can on be sent through the text message part of it, and that the functionality has improved, but not at the expense of basic functions. The app is also loading much slower, takes a lot longer for messages to show up as well as taking longer for keyboards and functions to show up. All of which wastes a lot of time. As I said, I loved this app up until a couple of months ago and would’ve given it a five star rating then. The only reason it has a three star rating now is because of that. Otherwise, it really deserves a one or a two star rating as it is now. I would gladly pay for the app if it still worked appropriately. Very annoying.

Still not improved!!! I have been using Google voice for nearly 4 years. I needed a safer way to contact clients while Keeping a low profile as well as a way to contact guys I date and block them if need be all while having the ability to archive messages to reference later since I’m also a writer. Overall the service works great but why no address book was included in iPhone app version is beyond me. So I had to add the clients number to the iPhone which became problematic when Facebook linked my profile to these contacts and all the sudden my privacy was violated. And because you can add and update or block numbers from the app only when you log in via your email it gets super annoying. I also wish google had allowed for pictures to be sent out not just received. I recently downloaded another Google voice 3 app which I hoped included an address book along with picture sending and since downloading and using that I can no longer make calls using regular Google voice app. I also wish the messages wouldn't be separated into various conversations with the same person. Why couldn't they archive like regular text message for the same number. Google please fix!!

From Google: Google Voice gives you a free phone number for calling, text messaging, and voicemail. It works on smartphones and computers, and syncs across your devices so you can use the app while on the go or at home. You're in control Forward calls, text messages, and voicemail to any of your devices, and get spam filtered automatically. Block numbers you don't want to hear from. Backed up and searchable Calls, text messages, and voicemails are stored and backed up to make it easy for you to search your history. Chat in groups, with photos Send group texts and share photos instantly. Your voicemail, transcribed Google Voice provides free voicemail transcriptions that you can read in the app or have sent to your email. Cheap international calling Make international calls at competitive rates without using your mobile data. Keep in mind: Google Voice is currently only available in the US. All calls made using Google Voice for Android use the standard minutes from your cell phone plan. Calls are placed through a US-based Google Voice access number, which may incur costs (e. g. when traveling internationally). 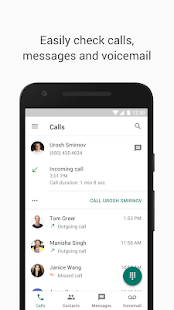 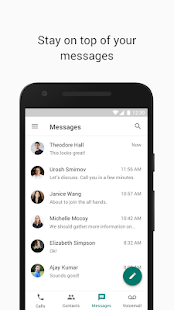 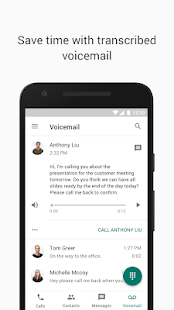 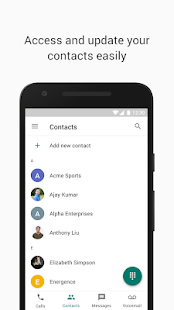