A Bible in text and audio in virtually every language on earth, including -- and this is what attracted me to it since I am a Classical scholar and translator-- the original Greek of the New Testament in the best text there is, the official text of the Greek Orthodox Church, downloadable as opposed to a web Bible, so you need not go online to use it .... for FREE. The audio is also excellent. There is really no disagreement among scholars that Greek of the 1st Century was pronounced as modern Greek is today, and not as Classical Greek was. Typically, when the New Testament is recited, it is done so in the Erasmian pronunciation which is a guess at what Classical Greek sounded like, only because most students of Ancient Greek are taught that pronunciation and do not know how to pronounce modern Greek. What’s worse is that it is done so by Anglo-speakers. The result is terrible, and one can be assured that no such articulation was ever heard in ancient times. It was not the way Greek was ever pronounced, if it ever was pronounced exactly that way at all, since the 1st Century BC. This app lets the user hear what New Testament Greek really sounded like. The announcer is a native speaking Greek, and he was recorded in what appears to be a cathedral, since his voice reverberates — a nice touch. And did I mention that it is all offered for free? Remarkable.

I really have been using this app since 2013. I was injured on a military deployment near the end of 2012 and sent back to the USA. I felt alone and reached out to God more than ever before. I needed to hear His word while I got dressed in the mornings and while I did assignments and was alone. I filled every moment with His word. This app allowed me to read or listen. This app allowed me to listen and read at the same time which doubled my learning capacity. It is easy to use and hasn't changed drastically since the beginning. I can plug it into my car and listen as well. The Jesus Film is such a great bonus because I was in Campus Crusade for Christ in college when Dr. Bill Bright was around and in charge. The Jesus Film has had such a big impact all over the world and has its own ministry. This app has so much to share. It is a must on my phone!!!I believe it is the best Bible app to use. It has pulled me thru dark times and been a battle buddy all on its own. 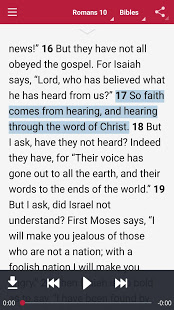 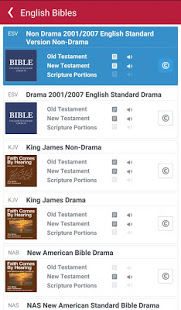 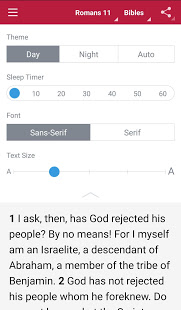 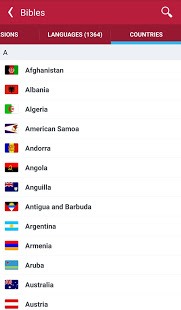