1- major fail : If in a large group, or small group really.. DO NOT INITIATE A GROUP VIDEO CHAT WITHOUT ASKING “ ARE YOU SURE “ !!!! same with a group phone call, do not initiate a group video or phone call without verification. I see it happen all the time in my large groups, accidental phone calls and accidental video chats, that has to stop. It is VERY embarrassing and unprofessional2- needs improvement : different contacts and especially different groups need different alert sounds.. We need the ability of setting or changing the sounds made for different contacts . some of my chats I need to know IMMEDIATELY if a message comes thru, and some (during work hours) or when I am with clients, I don't need the same level of attention.. I DON’T WANT TO SHUT THEM COMPLETELY OUT OR LEAVE THE CHAT .. I simply want to adjust the alert or ringtone for that particular chat to something more subtle.. while on the other hand , if it is a message from someone that requires more urgent attention ... I want a message from that person to be IMPOSSIBLE to ignore.. Please, give me the choice.Please address these 2 issues.

This is good stuff. Good cheese. One of my relatively close acquaintances (friends) has a certain cellular device (phone) that charges for virtually cummunication (texting), so we use this to "talk" to each other. I'll admit it does crash once in a while, but you'll hop right back on the message express as if nothing has happened. However, there's a good chance that's my own fault for running it on an iPhone 4S. Now for the weird stuffs. The whole color of the app is very appealing to me, most likely because I love that specific shade of green. I also appreciate that I can still use my old emoticons with some of the app's own added to the lot. I must say I favor Mr. Spookman (the skeleton) very much. Overall, this app has never given me a valid reason to dislike it (it probably will someday, but nobody really cares anout my personal, inside-the-mind opinion, so just ignore that bit), so if you like doing the texting, get the app that does the good texting.

I've been using Google Hangouts since 2013 as one of my main forms of communication. I've liked the interface for all the years I've used it and all of the improvements from sending multiple photos to sending your location to your friend(s), to even the animated emoji gumdrop gifs that you could send dubbed "stickers" (which are still cute as hell)!It's basically a triple threat app that needs to still be relevant if Google expects to compete with Apple in any way. It has FaceTime, Phone, and iMessage all in one and it's taken for granted every single day as it loses support for the newer apps like Allo and Duo.It's frustrating to see Allo and Duo catch on when they're two separate apps that can do what Hangouts has been doing for years.Keep it around, update it, don't let it die!Update: On iOS 11.0.3, it seems it’s having some issues with photos? Whenever I try to go to my photos directly inside the app and share a photo, it won’t let me. It’ll tell me to Cancel or Choose, and when I tap Choose, it slide over and shows the photo with no way to go back to typing or viewing my conversation. I have to forcibly close the app. Another issue would be that it won’t let me share my gifs via the share extension. It does allow me to share, but it freezes the gifs in place, making them a still.I hope you guys resolve this problem. It’s a great app that still deserves support.

From Google: Always stay connected with the new desktop app for Hangouts. Use Hangouts to keep in touch. Message friends, start free video or voice calls, and hop on a conversation with one person or a group. Hangouts Chrome app: Use Hangouts and get notifications as you move from tab to tab in Chrome, or even without a Chrome window open. Position Hangouts anywhere on your screen, even if you have more than one monitor. Keep conversations in a single window or pop out the important ones. View and continue your conversations across devices. Get notifications just once. After you see an alert, it'll be removed on other devices. Notes: Unlike the Chat for Google app, Hangouts doesn't support "invisible status". Mobile carrier and ISP charges may apply. 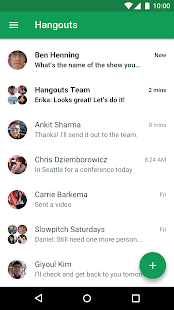 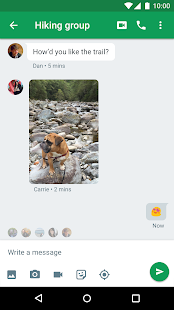