Discord is a lovely app. The range of options, customization, and ways to interact is astounding. The options keep growing, and piece by piece, it comes together! I use it to chat all around and find it as a wonderful alternative to the options out there. (cough, skype.) However, the app still has some growing to do: •The bug where a message duplicates and moves up, then is stuck there on every chat in the same place, overlaying itself across the screen, is still ever present. It’s a bit better since you don’t have to go hunting for the chat you lost, but still annoying and unintentional. •Some images and links have trouble loading. The image will show up fine in chat, and the link opens in Safari great, but tapping it to zoom in mid-app use causes the image to fail loading. Frustrating when trying to read something with low amounts of small text. This might also be a Tumblr thing, since this is most common with links from there. •A bit of an issue when opening settings while the keyboard was out somewhere else; the grey rectangle for covering up typing when the keyboard is out stays out, while the keyboard is put away. It obscures the lower half of the screen, goes away after a bit (~10 seconds,) but is still unintentional and not fun. There are probably more others will tell you. Not sure where you’ll go next, but I’m awaiting the trip. Many loves ??

I love discord, my friends and I use it as our main means of communication. However, that means I expect a lot out of this app, and when I need to message a friend or join a voice call I expect the app to work. Sadly, the majority of the time it just doesn’t. Even with a fairly new iPhone 7, which has no issues anywhere else, discord finds a way to make me fear my phone is broken only to find out it’s just the app not recognizing my headphones or crashing for the umpteenth time. At times I try to open the app just to have it crash multiple, and I stress MULTIPLE, times before I’m able to finally establish a connection with our server. Not to mention crashes once the app has actually opened; good luck trying to open a gif or send a photo from a bit far back in your photo album. The weirdest by far is the headphone issue. I for the longest time thought it was on my end, I went through three separate pairs of earbuds trying to get them to work—even trying an older pair with an auxiliary to lightning adapter—only to find that once I tested them in any app other than discord they worked fine.I want to love this app. Like I said, I love discord itself, the Mac version is wonderful, but for the love of Swift 3.0 I’ve never had such a horrible app experience with a platform I love so much.Do yourself a favor and stay away from the iOS version of discord; at least until some major bug fixes have been implemented.

I enjoyed every part of Discord and the live alpha map until the servers became overwhelmed once the monthly community events began and we went for at least two months without using a service we had paid for-the live map whatever you would call it. I have not checked back to see if it’s been built back up or if they were able to meet the capacity of players. And that’s where everything fell behind. I’m not sure The status now, they had lots of people paying 1499 a month and offered a discount month for it to be free which was very kind and professional and necessary. I still have not looked back into it because Niantic has bitten off a little bit more than it can chew with the amount of people that love and use that app. Thank you I would really like to be able to use it again but I don’t know yet that it has been returned to function. I will say there are very intelligent and kind people that are working for discord and try their best to keep up with what they have been given. Hopefully whoever supports the hardware makes sure those people are treated quite well. I plan on taking a look into it again one day but right now there are so many new things going on it’s still attracting a little bit more traffic than it can handle. I’m dictating so blame Siri if this makes absolutely no sense. CJPVB

From Hammer & Chisel Inc.: All-in-one voice and text chat for gamers that's free, secure, and works on both your desktop and phone. Discord is always completely free to use with no gotchas. This means you can make as many servers as you want with no slot limitations. Encrypted server to client communication keeps your IP address safe. Stop getting ganked because you're logged into Skype. Our resilient Erlang backend running on the cloud has built in DDoS protection with automatic server failover. Easily share images, videos, and links from your desktop or phone. Discord embeds most types of media directly in the chat. GIFs only play when you mouse over them, so your CPU is spared. Designed for use while gaming, Discord has minimal impact on your CPU. Your game's performance won't be affected in the slightest. It takes just 10 seconds and doesn't require any drivers or weird setting configuration. Discord can even run in the browser which is great for PUGs you invite to your voice channel or those stubborn friends of yours. Discord is built with the latest tech using a modern jitter buffer, automatic gain control, noise suppression, echo cancellation, system attenuation on Windows and more. 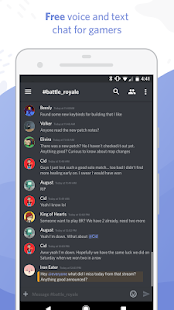 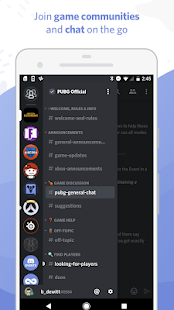 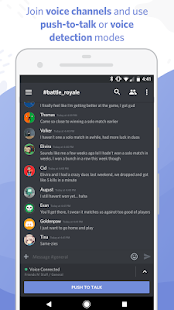 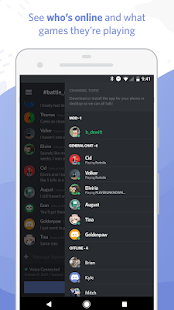