Sony Vegas Pro dominates the space between basic video-editing software like Windows Movie Maker and professional applications like Adobe Premiere. Sony won this niche by offering professional tools and functions at a fraction of the competitors' prices. The latest version of Vegas Pro 12 adds a good deal of improvements to an already great video editor.

Packed full of features: With Vegas Pro, you can edit SD, HD, 2K, and 4K footage in either 2D or stereoscopic 3D. Sync material from multiple cameras using the multicam feature to add a little perspective to your movies. The celebrated masking abilities of Vegas Pro 11 is improved in 12, enabling you to refine your editing.

Universal file support: Vegas Pro 12 can import and export projects from other video editors, such as Resolve, Final Cut Pro, Adobe Premiere Pro, and After Effects.

Ready to play: The video editor just works. With its streamlined layout, anyone with basic knowledge of video editing or production can pick up and start using Vegas Pro. You'll have to peek at the manual to use advanced features, but there are enough tools set out to let you start cutting.

Dated interface: The Vegas Pro 12 UI, although easy to grasp, looks out of touch when compared to the UIs of Premiere or Final Cut. The overall layout appears very similar to that of the 2009 release, so Vegas Pro offers a lot familiarity for current users but might alienate new adopters.

Incredibly functional but a little bland, Sony Vegas Pro 12 is designed for no-nonsense editors who want to get the job done right -- without all the frills. If you're a current Vegas Pro 11 user, updating is worthwhile for the stability alone. Newcomers can expect an easier learning curve. Sony has found a nice balance between function and price, coming in well ahead of main competitor Adobe Premiere in value. However, with the introduction of Adobe's Creative Cloud, arguments can be made for either app. Still, Vegas Pro 12 is a great choice for any price-conscious professional video editor. 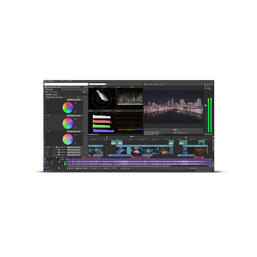