I have been using Twitch app for about two years now, and have always loved it overall. I think they have always been getting better, adding more and more to the mobile app with the addition of mobile subscribing, the ability to double tap for chat, mobile bits and all. But with this last update I’m very disappointed. I had fallen IN LOVE with the ability to swipe from one streamer on my feed to another and then back to check between them and see how they were doing in game etc. but I am extremely disappointed that it is no longer an option. That was part of why I liked the mobile app so much. I could go from one streamer to the next seamlessly and then back again after a few minutes to enjoy both and get into whoever was currently in a game or who I was in the mood for. Now that I have to go back out and minimize a stream to scroll and find the other streamer then do the same again to go back is downright a decline and a step back from such an amazing feature. Over all the app still is good, allowing me to watch my favorite streamers with ease and interact with the chat fairly well but this feature was a must have and now I’m not sure I will be on the app as much. I’m very disappointed that they would take such a great feature with ease of use out of their app.

While it often works and is still a very valid, not at all half-baked alternative to the website, it has been fairly unstable for me since day one. I’m nowhere near a frequenter of Twitch, just occasionally watch the streams of people like Vinesauce and Vargskelethor, but it’s become harder to handle since the new iOS update that changed the layout of the menu you get when you double-click the home button. Whenever I decide to play the stream in the corner of my screen, it pauses, and sometimes simply disappears. Today has been one of the worst days I’ve used it, as I can only spend, say, a minute on the app before it freezes up and forces me out. This isn’t the first time this has happened, either. Maybe the solid third time, and I’m fully unable to access the streams for more than maybe 20 seconds before it quits out. I’ve tried resetting my iPad and redownloading the app, but to no avail. I’m certain it’s an issue with the servers at this point, and a very pesky one. Please fix this as soon as possible, so I can actually use your app. Thank you.

From Justin.tv: Be a part of the world's leading live social video platform for gaming. With Twitch for iPhone and iPad, you can watch live streams of the video games and activities you love, and chat with streamers and other viewers, from anywhere, anytime. From League of Legends, to Overwatch, to live art demos, if it's worth watching, it's live on Twitch right now. + Live and recorded video of top video games, esports events, art, cooking, music, and more. + Interactive live shows by Xbox, Sony, Riot Games, Blizzard. + Completely unique programming like Bob Ross marathons and exclusive video game events. + Full-featured live chat with one of the largest gaming communities in the world. + Dark mode quality for late-night viewing. + Simple, intuitive navigation that makes it easy to discover the content you care about most. + Mobile broadcasting, putting the ability to go live right in your hand at the touch of a button. For feedback and questions, please visit our support center https://help. twitch. tv. 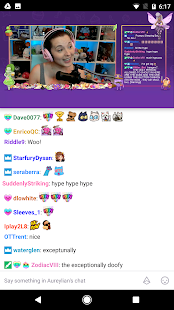 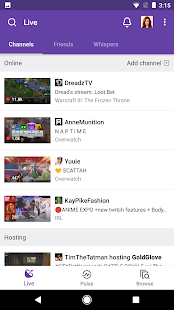 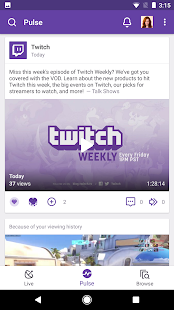 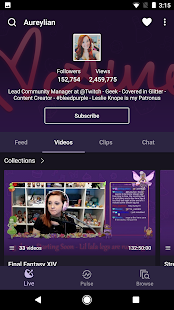