If you're looking for Microsoft-caliber applications for free, OpenOffice has alternatives to Word, PowerPoint, Excel, Access, and more. OpenOffice has come a long way after racing to improve its compatibility with Microsoft Office.

Free: The most significant feature of OpenOffice is that it's free -- no subscription fee, no lump sum, no upsell to a pro version. If your business needs don't include complex word-processing or database-management features, then OpenOffice is a bargain.

Compatibility: OpenOffice supports the same file formats as rival programs like Word and Excel. Those coming from Microsoft will be pleased to hear that Office files work in OpenOffice, too.

Function: For most basic uses, OpenOffice holds its own. Math allows you to create basic charts and cell-dependent calculations just like Excel, and most useful features from Microsoft Word also appear in Writer, including spell checkers and most text-formatting options.

Not for heavy Excel users: Expert spreadsheet manipulators will find it hard to live without compatibility with Visual Basic for Applications, especially if your macro functions depend on Microsoft's environment.

Poor presentations: If you create the most basic of presentations, Impress will suffice. But PowerPoint holds a large lead when it comes to variety in designs, templates, transitions, and collaborative features. Though OpenOffice can open PowerPoint files, don't expect the transitional effects to import.

Apache OpenOffice vs. Microsoft Office: The question isn't which suite has better features (that's Microsoft's), but rather whether the open-source suite has enough features for your work. Microsoft offers affordable pricing for Office 365, a subscription model that puts Office on just about every device you can imagine. But if you're looking to save a few bucks and don't need all the fancy support of Office, then OpenOffice's core offerings will get the job done.

From The Apache Software Foundation: Apache OpenOffice is both an open-source product and a project. The product is a multiplatform office productivity suite. It includes desktop applications such as a word processor, a spreadsheet program, a presentation manager, and a drawing program, with a user interface and feature set similar to those of other office suites. Apache OpenOffice also works transparently with a variety of file formats, including those of Microsoft Office. Localizations of Apache OpenOffice are available in 27 languages, with more being constantly added by the community. Apache OpenOffice runs on Solaris, Linux (including PPC Linux), and Windows. Written in C++ and with documented APIs licensed under the LGPL and SISSL open-source protocols, Apache OpenOffice allows any knowledgeable developer to benefit from the source. 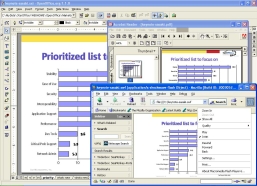