Auto Clicker by Shocker can simulate single or double clicks by your left, middle, or right mouse buttons at intervals you select, including pauses, freezing the cursor, and stopping automatically after a predetermined number of clicks. The first auto clicker appeared not long after the first mouse, and since then they've evolved alongside mice. Some auto clickers have stayed simple, though. Like primitive but successful organisms that have found their niche, the most basic form of auto clicker lives on, emulating mouse clicks on demand. Auto Clicker by Shocker is as good a specimen as any. You can also set a hot key to stop the clicks on demand.

Three by three describes Auto Clicker's interface. With three File Menu entries, three buttons, and fairly close to 3 inches square on the screen, Auto Clicker is simplicity encoded. The three main buttons start and stop the clicks and open an Online Support page that includes a contact form. The only command under File is Exit, but the Options menu contains three (naturally!) choices: Click, Group, and Settings. We opened the Clicking Options and set our Mouse and Click choices on drop-down lists. We could also check a box labeled Freeze the pointer to keep the cursor from moving during clicking. Under Group/Interval we could set the optional Autostop feature to stop clicking after intervals of a certain number of clicks. Under Settings, we could change the Click/Stop hot key from F9 to avoid conflicts with other programs. The View Setting tool lets users hide Auto Clicker while it's clicking and/or show itself when it finishes. We could also Show or Hide the program from its System Tray menu.

So how does Auto Clicker perform? Like a champion. We quickly set up our clicks and pressed the Click button. A notification appeared in the system tray (it's not called the Notification Area for nothing!) indicating that Auto Clicker was doing its job, clicking away as if we'd been tapping our mouse button constantly. Clicking Stop or pressing the hot key stopped the clicking in its tracks. Auto Clicker by Shocker proved simple yet effective at automating mouse clicks.

From SoftByShocker: You can choose to automatically click your left, middle and right mouse button, set the interval at which the clicks will occur, set pauses between clicks, automatically stop after a desired ammount of clicks. You can also stop the clicks at any time pressing the hotkey. "Random autostop delays", you can set the AutoClicker to pause the clicking for X milliseconds, where X is a random value. 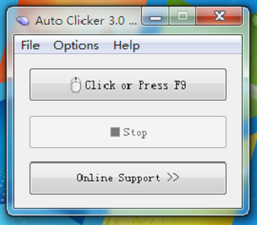