From MTV Networks: Watch full episodes of MTV shows anytime, anywhere with the MTV app. Stream episodes, clips, and live events on your TV with Chromecast. Can't miss an episode? The MTV app can send you notifications when a new episode is available for your favorite shows. FULL EPISODES. Just sign in for free with your TV provider to watch full episodes from current and classic MTV series including: Teen Wolf. Sweet/Vicious. Catfish. Are You the One? Ridiculousness. Teen Mom: OG. Teen Mom 2. The Shannara Chronicles. Scream. The Challenge. The Real World. True Life. Girl Code. Jersey Shore. Beavis and Butt-head. Daria. The Hills. Awkward. Faking It. + More. Access to all full episodes is included for free with your TV subscription to participating providers. If your provider isn't listed, don't panic. We are working hard to get all TV providers to participate. FREE, UNLOCKED CONTENT. You won't need to sign in to watch other great MTV and MTV News videos, including select full episodes, after shows, bonus clips, sneak peeks, and exclusive, digital series like Decoded, Braless and After Hours. CHROMECAST SUPPORT. The MTV app is Chromecast ready, so you can cast your favorite shows to your TV. FAVORITES & ALERTS. Never miss an episode. Easily bookmark the MTV shows you watch most often by adding them as a 'favorite' show in the app. Set up 'new episode alerts' for the shows you just can't miss and we'll send you a notification when the next episode is available. WATCH & STREAM LIVE EVENTS. Get inside access to the MTV Video Music Awards (VMAs) and the MTV Movie Awards with exclusive clips, backstage interviews, and red carpet highlights. Watch real-time livestream coverage from music festivals, San Diego Comic-Con and other events. This app requires iOS 7.0 or later. MTV is also available on the App Store on Apple TV. For more information on this app and online behavioral advertising, see http://srp. viacom.com/sitefaq.html. The Terms of Use for this app includes arbitration for disputes - see http://legal. viacom.com/FAQs/. 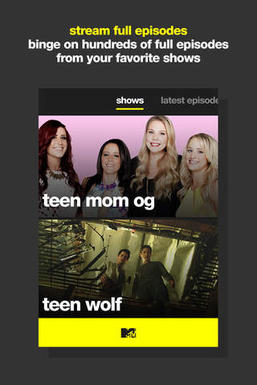