It features all sorts of ways to load up music, but all of the music sources are copyrighted!! I can't even record my own previously created SoundCloud tracks because of it. Most of the app itself is locked and costs about $10 to unlock all of the stuff you would actually want on a real controller. I like the base effects and the ability to preview certain effects but maybe if you're gonna charge the users for all of the additional crap, you should at least use maybe 10% of that more, on the app itself. It's not even all of my music. I have X amount of Eminem songs and I can only use one. How does that make sense. Why would you only restrict one song from an entire album, let alone an A-Class rapper/artist. Sure the mixing mechanic is pretty good for an iOS app but gimme a break. I have to either play live, or nobody can even hear what I'm playing, if I can even play it. Then instead of it being an easy sharing process, you either lose the recording all together and have a fake link that doesn't work so you end up deleting a whole 20m mix. There's no "save to recordings" button or something simple. Then if I do save it with cover art, I go to share it and the cover art doesnt even come up. Idk what the point in that is either.

It’s a pretty good app, and it’s easy to use, although I don’t use this for DJing. You can mashup songs, which often give good results (tip: the song with the lower volume will sync up to the tempo of the higher one). This app is a good start to those wanting to start DJing or creating mashups. A lot of the base features have proven extremely useful to use and fun to experiment with. My biggest critique of this app is that every time I restart my phone, the “Hot Cues” for parts that I’ve marked always get shifted. This hasn’t been much of a problem before, but now my 200+ song playlist now needs to be gone through and resorted. Is this a bug? If so, I hope that the developers are working on it. Another problem I have is with the reworking the measures of songs. The app automatically attempts to measure out each beat of a song, but sometimes it’s off by half a beat, or doesn’t even match up at all. If the developers could perhaps implement a system to manually set the beat of a song, that would be great. All in all, this app is a 6/10, pretty good software and love sup to its name, but some parts are glitchy and clunky to use.

I LOVE IT SOOOOO MUCH!!! It has all of my songs and my favorites. It definitely help me learn basics. You can make it multiplayer like friends able to share with them they can play songs together I would love that because doing stuff like that with my friends is fun. They’re can be a chat room and all sorts of things they’re can be mini games that include your song like A bunch of people but songs in and they play it they can do stuff to it like the effects and stuff and then people give that person a score they keep on going until everyone and they’re songs are done it shows the leaderboard and they can see who has the highest score. That is all from me thanks for reading! :3

From DJiT: Introducing edjing Mix - the brand new version of the world's most downloaded DJ app voted Best App by Google 4 years in a row (2013-2014-2015-2016) - reworked to ensure even greater performance level. Designed in partnership with pro DJs, edjing Mix transforms your device into a real DJ setup and stretches the limits of djing on mobile, offering unlimited creative freedom. Need to put down a set out of nowhere? To enliven your next party? To rock out an unplanned jam? edjing Mix offers all the essential DJ tools to create amazing mixes on the go. Access millions of tracks coming from Deezer, SoundCloud and all your local folders and remix in an instant with more than 20 DJ fx and features. Not to mention the all-new sampler and the hardware integration to push even further the boundaries of the mobile djing. 'edjing Mix offers the same capability of a pro DJ software except with the convenience of being on a device that fits in a pocket. ' DJ Tech Tools. 'The only application to offer real time sound processing, edjing shows you how it feels to be a real DJ' GQRemix +50 million tracks- Music library (access to all your local music) - Soundcloud integration- Deezer integration (requires a Premium account) - create multisource playlists with songs from both your local and streaming sources- smart search feature that displays results for all your music sources on the same screen- queue system to prepare the upcoming songs- advanced sorting: browse by alphabetical order, BPM, or TimeA new major feature: the sampler- access 16 free samples to trigger when you want on top of your music: siren, gunshot, kick, snare. possibility to link the sampler to the crossfader to cut the pads' samples sound depending on your crossfader's position. upcoming new samples created by Pro DJsAll the must-have DJ tools- automatic BPM (Beats per minute) detection for all your songs- Tap BPM feature to manually adjust the BPM of your tracks- continuous sync between your two tracks- a little audio spectrum to navigate in your music- a wide audio spectrum for optimised beats detection- pro audio FX: Echo, Flanger, Reverse- audio FX expansion (in-app purchase) : Roll, Filter, Steel, Color Noise, Beatgrid. and more.automated audio FX sync on the beats (loop, cue, seek) - loops: from 1/4 to 8, or customizable through 'in' and 'out' point- set up to 4 Hot Cues on each deck- EQ three bands and Gain- Pre-cueing with headphones (in-app purchase) - Automix mode to let edjing mix and do seamless transitions between your tracks- ultra precise scratch- a "Slip" mode that can be activated for Loops and Scratch- HD recording of your mixes and scratch routines in. wav format- 4 skins to customize your turntables (in-app purchase) : Diamond, Gold, Neon, MetalTurntables designed by pro DJs- intuitive interface that gives you a direct and quick access to all the essential features to gain time during remix live sessions- optimized turntables: you are only 1 click away from the essentials- possibility to reorder the audio FX lists to customize the panelCompatible with Mixfader- remix with edjing Mix and the world's first wireless crossfader (themixfader.com) - Mixfader becomes your crossfader for you to scratch on edjing"To detect and connect to your Mixfader, the app needs permission to activate your Bluetooth, and access your location. This is required by the Android Bluetooth System. Mixfader requires Bluetooth LE and Android 4. 3 onwards. "Remix from songs your Android Wear- access your set key information- sync your songs- manage 4 DJ effectsAbout edjing MixKeep up-to-date on our latest news: www.edjing.comFacebook: http://www.facebook.com/edjingAppInstagram: http://instagram.com/edjingofficial/Twitter: http://twitter.com/edjingContact our Team: support@edjing.com. 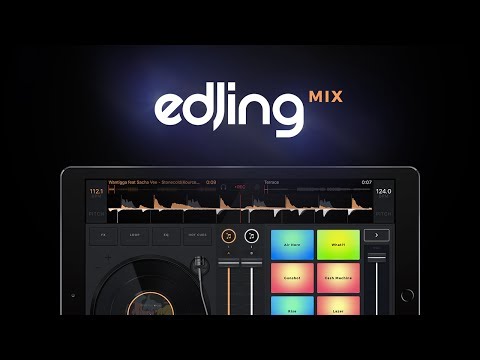 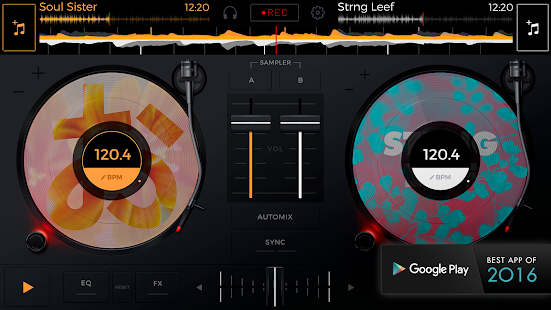 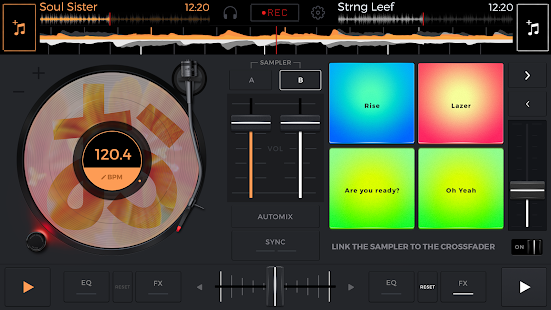 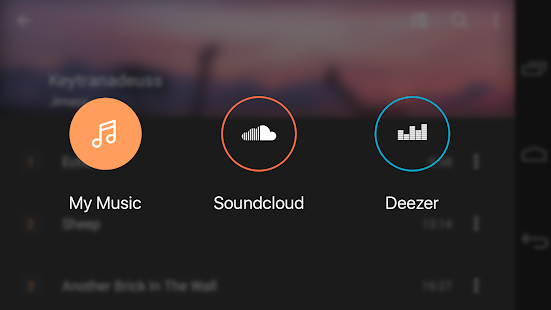